Really? Yes, we are professional tailors and we know math. Garment math. Seriously, it's a thing. 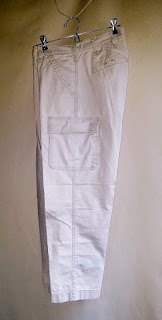 After years of faithful service, a blotchy blue stain appeared. The knees were worn. Repeated hot washing and drying resulted in a bit of shrinkage. The owner cast them into the "give-away" bin.

The pants had been washed and worn into a such a comfortable state of being ...

With a bit of addition and subtraction, the two pair of straight legged men's pants became one woman’s casual A-line skirt, with a touch of elastic to snug in the waist, and a front slit with matching topstitching.

And two playful shoulder bags for a couple of stylish school girls.

Thankfully, advanced math wasn't necessary. But this is proof that just about anything can be recycled into a new life.

(No pockets were harmed in the transformation of these pants. In fact, almost everything from the original pants was used in the skirt and shoulder bags, or will be reused in other projects. Reuse, recycle, reduce ...)

What’s in your give-away bin?

Let us help you with some garment math!

See our Etsy Shop at Kathleen Temple, TailorkathleenTempleTailor@gmail.com
Posted by kathleen temple, tailor at 9:10 AM

kathleen temple, tailor
Harrisonburg, Virginia, United States
I design, create, alter, and repair clothing in my lovely, spacious, well-lit studio which is tucked into a wooded area of Virginia's Shenandoah Valley. Here, beautiful fabrics surround me and music is always in the air. Lyle Lovett is singing right now...... My delight is to create dresses and other garments either from my dreams and visions or from YOUR dreams and visions. Please send me an email so we can discuss the custom sewing I might be able to do for YOU! KathleenTempleTailor@gmail.com Text messages work well too: 540-574-4311

Yes, it truly is wool satin, cut on the bias